Shiitake mushrooms need no introduction as they are pretty common all over the world for their soft, velvety, and meaty texture. They are rich in savory, juicy but little bit chewy and earthy flavor that easily replaces meat in several traditional cuisines.

Here, know the best substitutes for shiitake mushrooms to get a similar meaty goodness. However, it’s very important to decide which substitute will go best in your recipe instead of shiitake mushrooms. Once you know how to decide, you can easily replace them without compromising their flavor and texture. So, let’s read on and find out the best replacements for your food.

Shiitake mushrooms being more common in traditional foods, are native to East Asia. They are widely cultivated and consumed nearby Asian territories. Both fresh and dried shiitake mushrooms are pretty common in meat dishes, soups, casseroles, and other versatile cuisines. 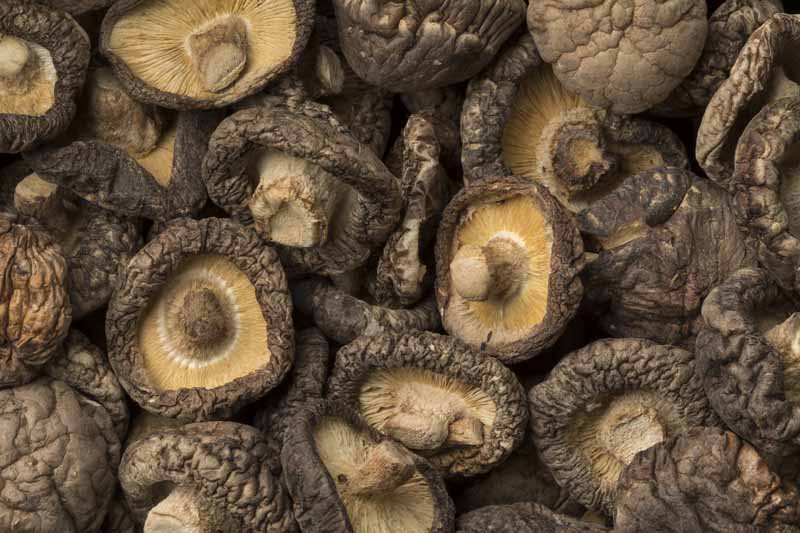 Dried shiitake mushrooms would be the best substitution when there’s no fresh shiitake on hand. Although both fresh and dried versions are the same thing but later has a stronger aroma and flavor.

Use dried or drained shiitake mushrooms with a lighter brown umbrella or cap and a nice luster. There are three typical kinds of dried shiitake mushrooms, Donko, Kouko, and Koshin, depending on the appearance of the cap. All these are widely common in Chinese and Asian cooking dishes.

You can use any available type in your food recipe instead of fresh shiitake mushrooms. Make sure to pre-soak them before cooking as they will soon come back to life.

After soaking for 15 to 20 minutes, replace them with fresh shiitake mushrooms in Noodles, soups, stir-frying dishes, and in many more savory treats. 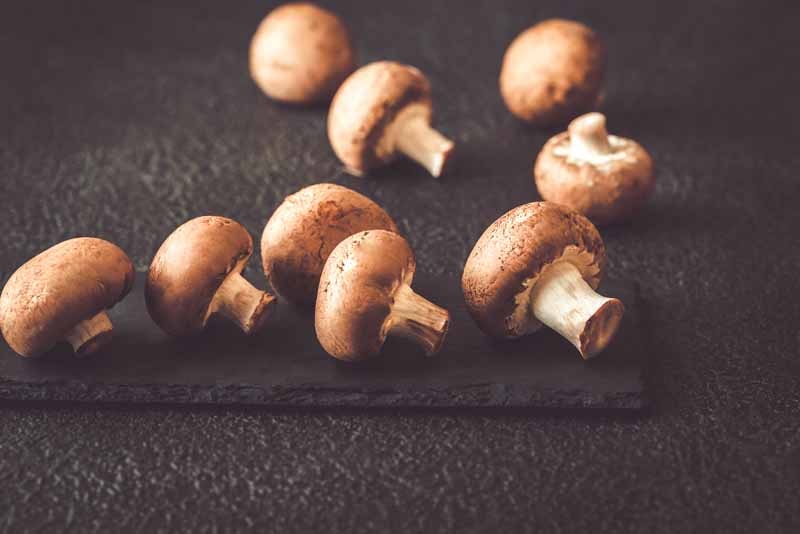 Cremini is a smaller yet versatile mushroom with a smooth and round brown cap. Mostly, it is sold as Baby Bella mushrooms in the markets and superstores. Cremini resembles portobellos and white button mushrooms as they are the same variety.

Their juicy and savory flavor gives your dish all it needs. They offer a delicate, earthy, but meatier texture to your favorite food demanding for shiitake.

Oyster mushrooms are the most common and probably the most delicious and flavorful variety of mushrooms. When compared to shiitake mushrooms, oysters are affordable and easily available in market stores throughout the year.

In terms of flavor and texture, oyster mushrooms have a more delicate and chewy texture with complex hints of savory flavor. However, their taste is more creamy, sweet, and subtle seafood-like to many people.

Due to their deep pronounced, yet complex flavor, oyster mushrooms go great as shiitake mushrooms alternative in stir-fried food dishes, cuisines, stews, and meaty side dishes.

So, if you’re going to make delicious pasta or risotto, go with the fresh version of porcini. However, they also go well in sauteed or fried side dishes. While, choose dried porcini mushrooms if you’re planning to prepare yummy stews, soups, and sauces.

In terms of flavor, porcinis have an intense meaty flavor profile. As a substitution for shiitake mushrooms, porcini gives umami, creamy, and rich flavor to savory treats. So, their final flavor is not too far from shiitake mushrooms when cooked.

Portobellos are the mature version of cremini, offering more flavorful, meaty, and juicy texture to savory recipes. Because of their meaty caps, portobellos also substitute meat in several dishes.

And as the best replacement for shiitake mushrooms, portobellos go great in soups, stews, casseroles, and many other delicious savory treats.

Other Substitute For Shiitake Mushrooms

However, there are also some other substitutes that you can use instead of shiitake mushrooms in your recipes. Their final mouthfeel and texture aren’t too far from the real shiitake flavor. For instance, lobster, maitake, and enoki mushrooms would be the best substitutes for shiitake mushrooms. So, the final choice will be yours.

Lobster mushrooms are known for their meaty, fishy, and seafood-like taste and flavor. They can be little bit chewy with a denser texture. Their subtle sweet flavor adds a lobster-like taste to savory dishes.

When compared with shiitake mushrooms, their flavor and texture profile slightly differ. However, you can still use them as a replacement for shiitake mushrooms in sauces, vegetable salads, roasted meat, and savory stews.

Maitake mushrooms are well-known for their umami flavor and delicate texture. They have a pleasant yet stronger earthy aroma and are thus widely common in cooking recipes. Maitake mushrooms pair well with other traditional mushrooms.

They offer almost similar richness and filling to the dish like shiitake. Therefore, one can also use them as a substitute for shiitake mushrooms in sauces, stews, and salads.

They go great either boiled, fried, steamed, or grilled and as a savory side dish for meat, fish, and potato recipes.

Enoki mushrooms are much like maitake mushrooms in flavor and texture. They offer a milder earthy flavor yet a stronger aroma to food dishes than maitake.

They retain their pleasant aroma, texture, and deep flavor profile even after cooking. Moreover, enoki mushrooms go well in dishes when they come to replace shiitake mushrooms. They go great in casseroles, pies, salads, meat, and poultry dishes.

Here are some non-mushroom alternatives for shiitake mushrooms that will go great when there’s no mushroom on hand. Now, it’s the best part for vegans. Instead of shiitake, use other vegan replacements such as eggplant, bell peppers, zucchini, and celery to prepare vegetarian food.

Non-mushroom substitutes mean that there will be no mushroomy, woodsy, and seafood-like aroma and texture. Thereby, you can use them in your vegan recipes to achieve nearby flavor to shiitake.

If you’re going to prepare vegetable salad, stew, casserole, or stir-frying dish, use eggplant, zucchini, and celery as substitutes for shitake mushrooms. Moreover, if you have bell peppers and sun-dried tomatoes on hand, add them to your savory treat to achieve almost similar savory shiitake flavor.

Besides these substitutions, one also has an option to go with tempeh, tofu, and jack fruit to several pies, soups, sauces, and savory side condiments instead of shiitake mushrooms. So, don’t bound your cooking to some specific ingredients, be creative with your recipe flavors and mouthfeel.

How To Use Substitute for Shiitake Mushrooms?

As we all know, shiitake mushrooms have a unique texture and pronounced flavor. But there is a number of other mushroom and non-mushroom alternatives that you can use in place of shiitake. They will offer almost a similar flavor and sometimes texture to your dish as shiitake mushrooms.

So, when you want the similar shiitake texture or aroma in your food, go with portobello, cremini, porcini, and dried shiitake if possible. They offer a pleasant fungal-like aroma, chewy or fibrous texture with a subtle earthy flavor to the recipe calls for shiitake mushrooms.

But, if you have enoki, maitake, and lobster mushroom on your pantry, they will also go great as substitutions for shiitake.

However, if you are a vegetarian and want to get the mushroomy flavor in your dishes, you can use non-mushroom replacements such as eggplant, zucchini, celery, and tofu or tempeh. These alternatives will go well in stews, casseroles, salads, and pies.

How Long Are Shiitake Mushrooms Good to Keep?

Shiitake mushroom lasts fresh and good to consume for 10 to 14 days if refrigerated. Store them in a paper bag properly so that they can’t get any mold or bacterial growth on them. Dried shiitake mushrooms are best to store as they can be stored for up to months. If stored properly in the refrigerator, they will be good to keep for 6 to 9 months.

How Long Do the Shiitake Mushrooms Need To Be Cooked?

Shiitake mushrooms are quite easy and quick to make. They take almost 8 to 10 minutes to cook properly. It is not recommended to eat shiitake raw or undercooked, as they can harm you in many ways. So, cook them until they appear tender and golden brown with a pleasant earthy aroma, and that’s it.

How Can You Tell If a Porcini Has Gone Bad?